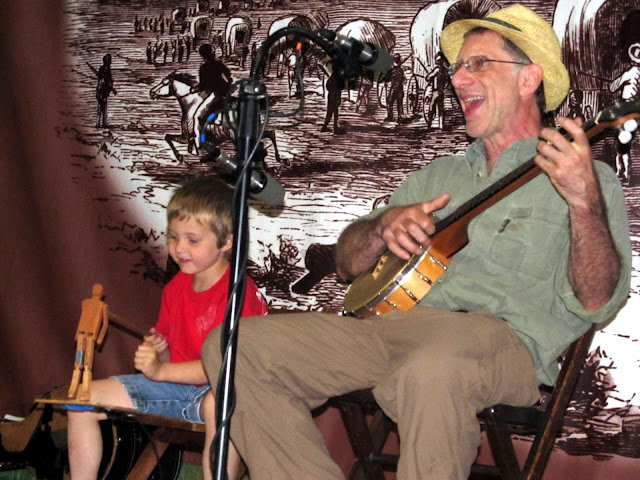 My sweet sis, Stacie, and her kids visited us a few weeks ago. We had such a great time! The kids always love to go to the Oregon Trail Interpretive Center in Baker City, so we made a special trip there and then had pizza afterwards. They happened to have a guest entertainer who had all kinds of percussive instruments, many that would have been used on the Oregon Trail. This guy was so talented and very interactive with the kids, letting them form a band on stage. 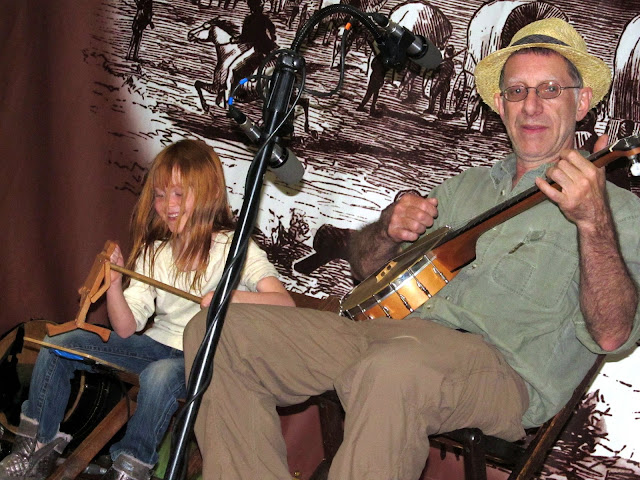 The kids got to play with a Limberjack. I think this was their favorite instrument. It really is quite entertaining and sounds like it is dancing a jig. As you hit the board it "dances" on. 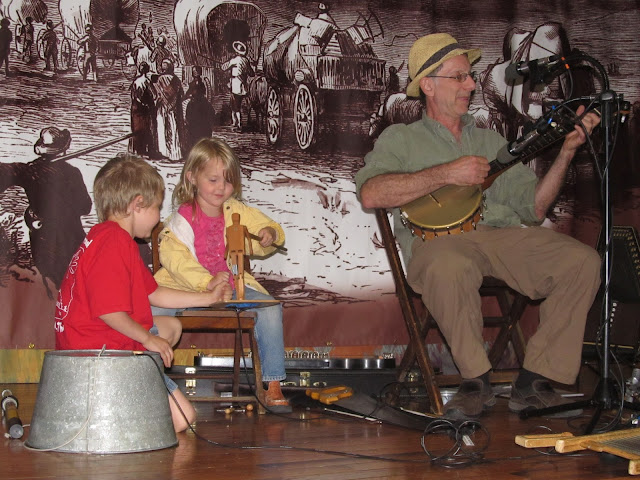 My nephew Jacob was helping his little sis, Lily, bounce the board. I wish you could have seen how cute their faces were as they did this. 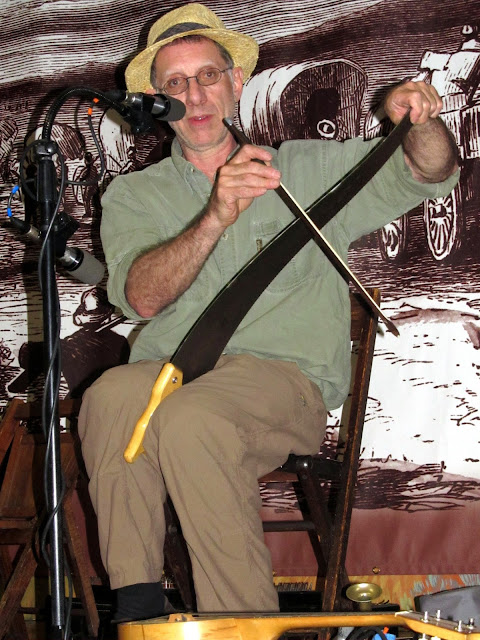 The "bandmaster" played a fiddle bow on a saw. It made the craziest alien-like noises. This guy had some serious talent! 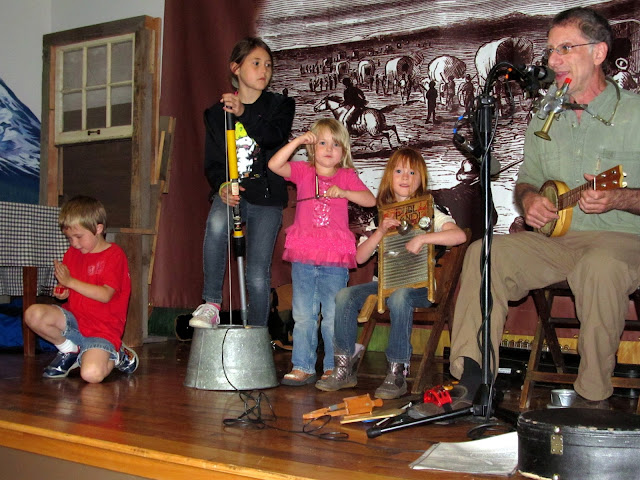 Jacob with the spoons, Jessica playing bass on the wash tub, Lilly with her triangle and Hailey playing the washboard. 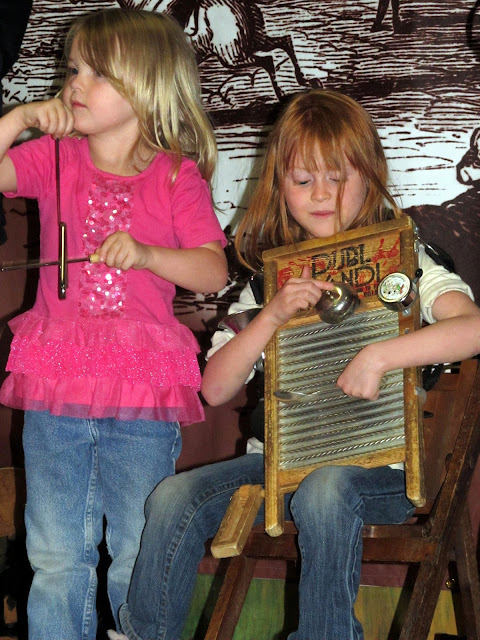 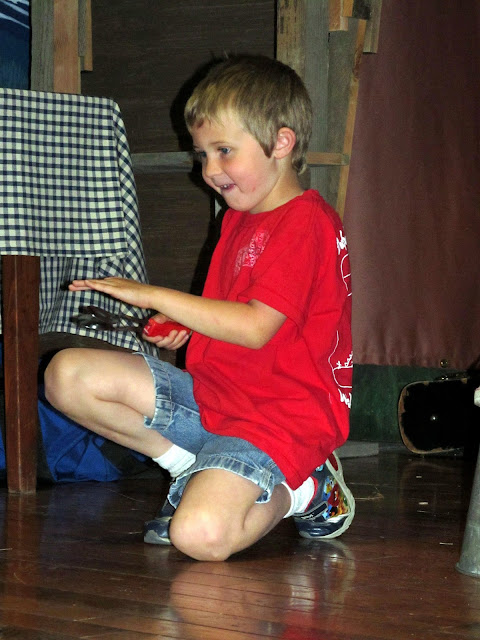 Jacob was cracking us up. He has some talent for music we discovered. He was hitting those spoons all over his body, just like the bandmaster. It was cute! He was just grinnin' ear to ear the whole time. He is super coordinated. Hope he picks up an instrument. I sent my half-sized fiddle home with Jessica. So excited that she is going to start lessons. I hope to be jammin' with her soon!

Was so blessed to have them visit. It is so much easier now that the youngest of our children is 4 years old. The older kids are more independent, which makes it really nice. Stacie and I were able to really relax more and have some great sister time! 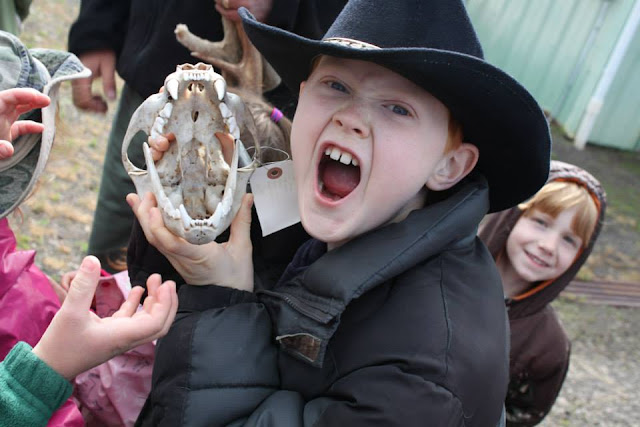 It thought this was an eye-catching photo. My friend, Molly, took this of Josiah being silly with a cougar skull, one of several predators who prey on the elk at the Starkey Elk Experiment Station. 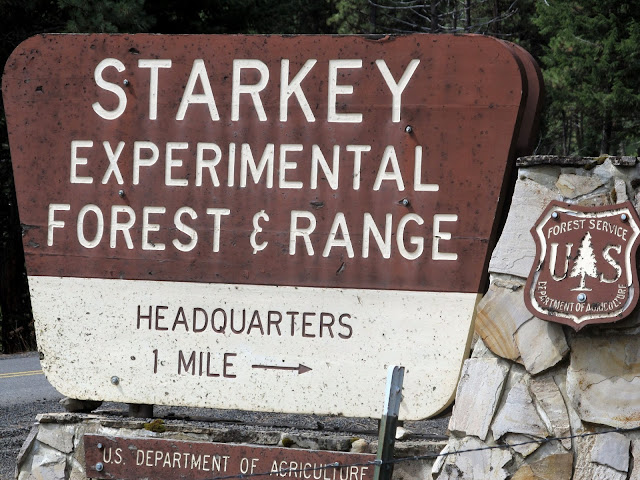 The 40,000 sq acre station is home to hundreds of elk. Its high fences keep the elk in, but don't keep the predators out. This is the only station of its kind. 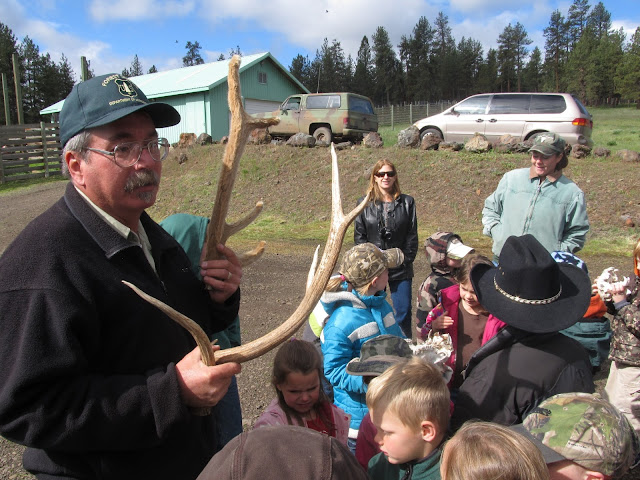 Listening to our Forest Service wildlife biologist guide talk to us about the research they are doing. Did you know that when an antler gets disfigured or bummed up, when it grows back each year it will have the same defect? Even the researchers have know idea why this is. 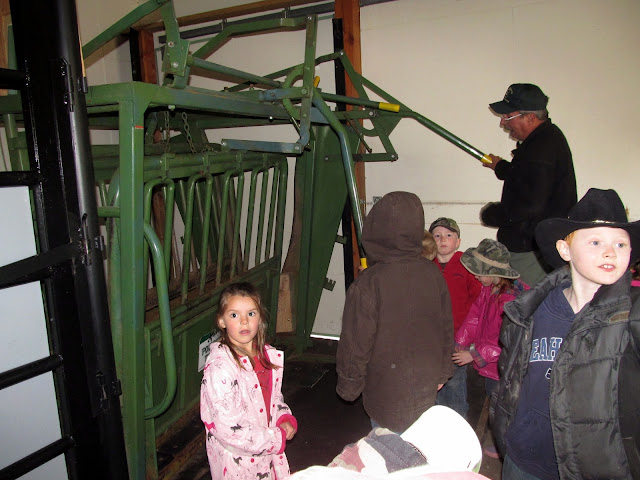 Elk squeeze chute, where they take blood samples, check for pregnancy, etc, all for research purposes. 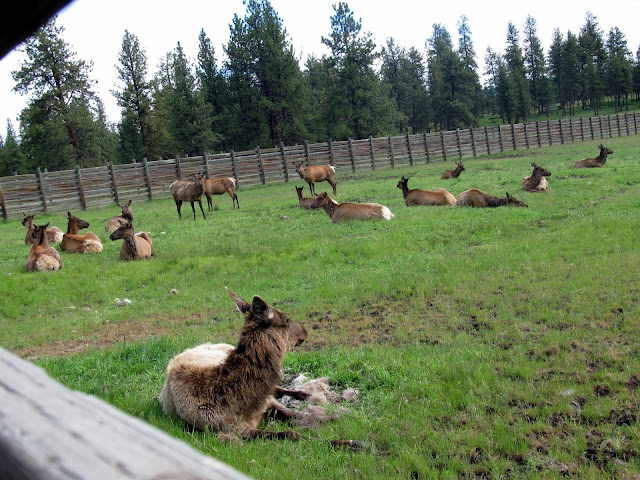 Most of the elk on this place are wild, but there are a few imprinted bottle babies they use for research, too. They can walk beside the elk and note what type of plants they are eating or what kinds they avoid. 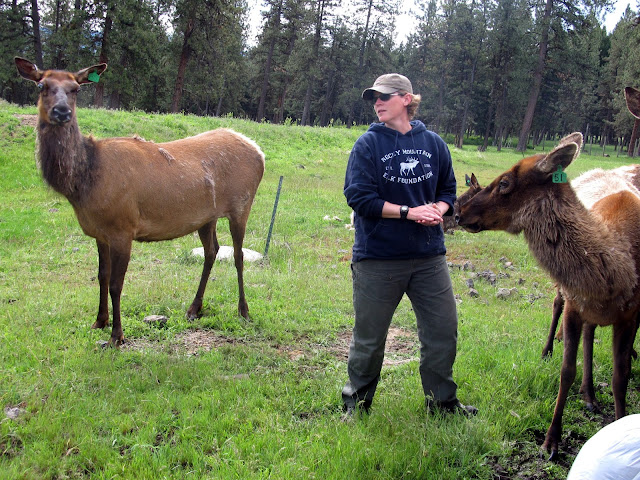 Rachel is a researcher and has been taking care of these elk for 16 years now. They are obviously her "babies". 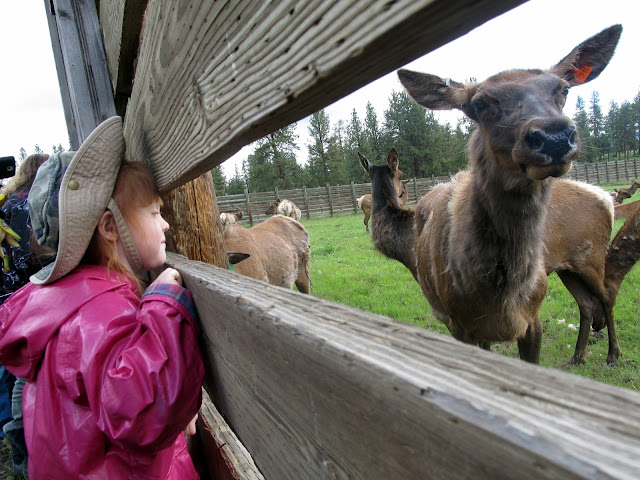 Some of the elk in this pasture were 23 years old. They were all losing their winter coats, so it was fun for the kids to see just how long their winter hair is. 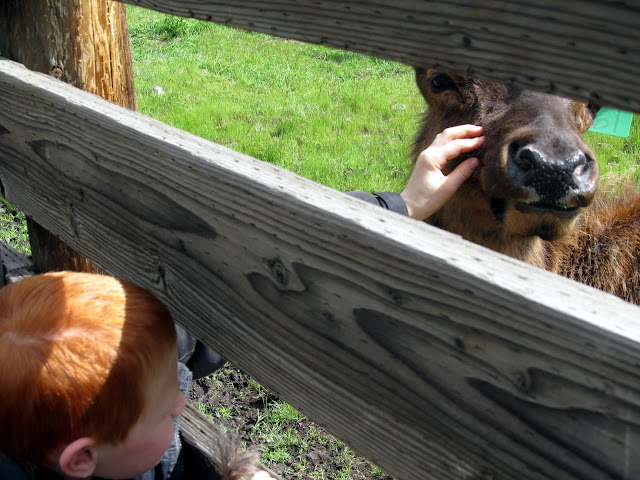 The kids were thrilled to be able to actually pet an elk. Not many people have been able to do this! 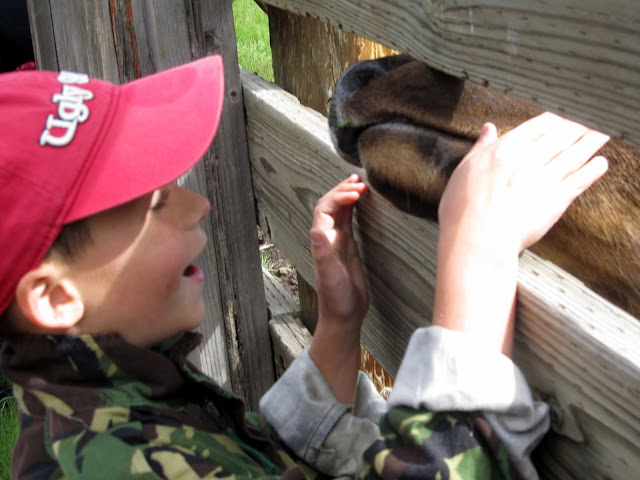 So much fun! A big thanks to my friend, Becky, for organizing this wonderful field trip. Hope you've enjoyed the pictures and info. We're done with homeschooling for the summer. It has been so nice to have some time to relax as we continue to wait for our military orders. 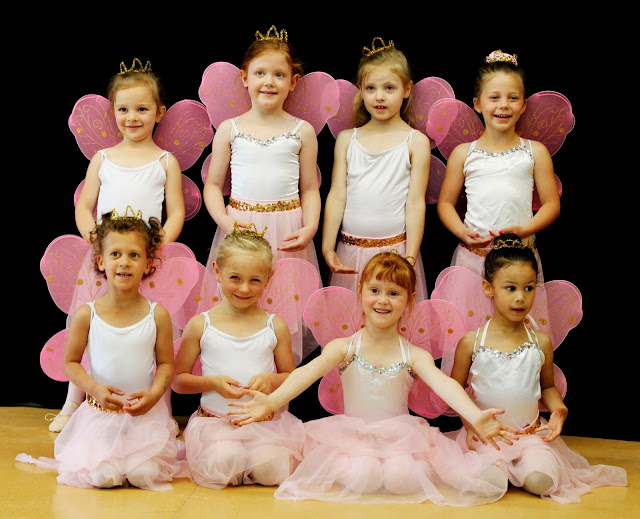 My sweet friend, Molly took this wonderful picture of the girls in Hailey's "Creative Movement" class. I love this class because they get to do a little ballet, tap and tumbling. Hailey had her first recital about a week ago. As usual, I watch these things with bated breath, because my children are SO precocious and DON'T have a shy bone in their bodies. Can't you just see it in this photo? Everyone is smiling when they were supposed to repeat the word "fairies". Apparently Hailey got the "inability to talk without using your hands gene" like her mom. I love it though (most of the time). However, when I kept seeing my daughter sneak onto the edge of the stage and attempt to join the professional ballerina they hired for this wonderful "Sleeping Beauty" production, I must admit I was slumping in my seat, beet red. Hey, at least the grandparents were there to suffer (and laugh) with me : o)

I didn't get many pictures of the actual recital because the lighting was really bad, so I took my camera along when they did a dress rehearsal for a local nursing home. Here are a few pics from that performance. 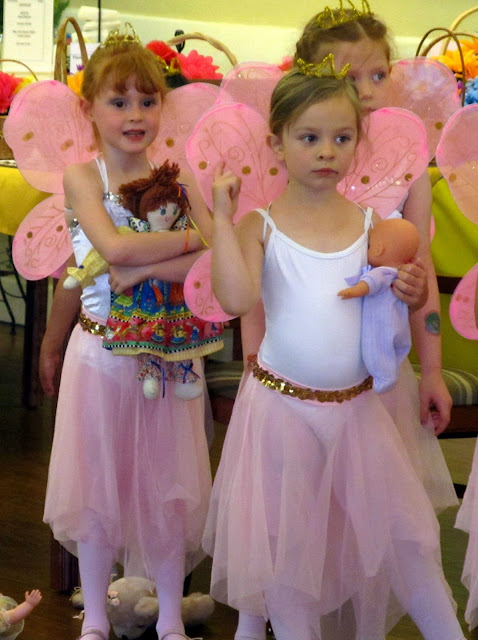 The little fairies are bringing their gifts to Sleeping Beauty. Hailey was SOOO excited to get to wear make up. 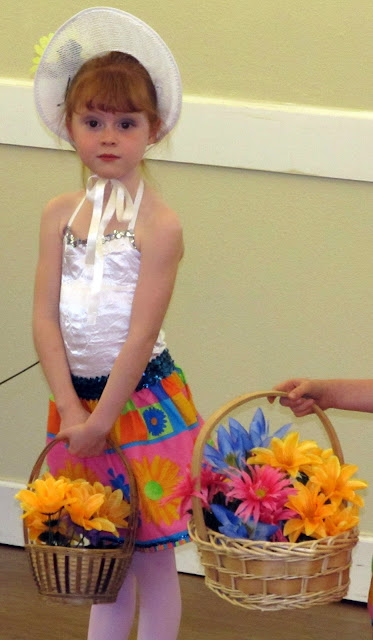 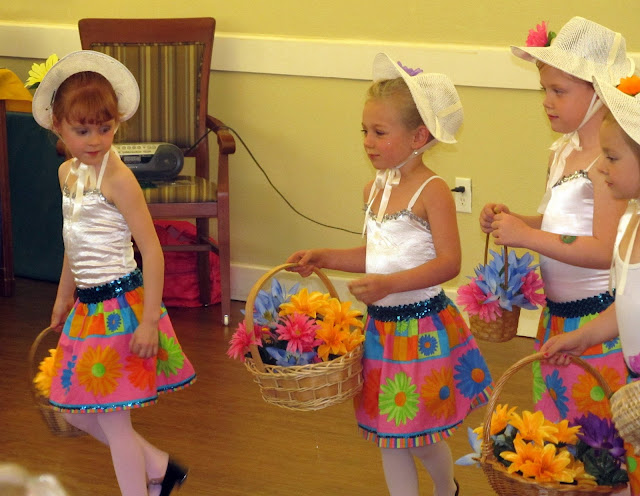 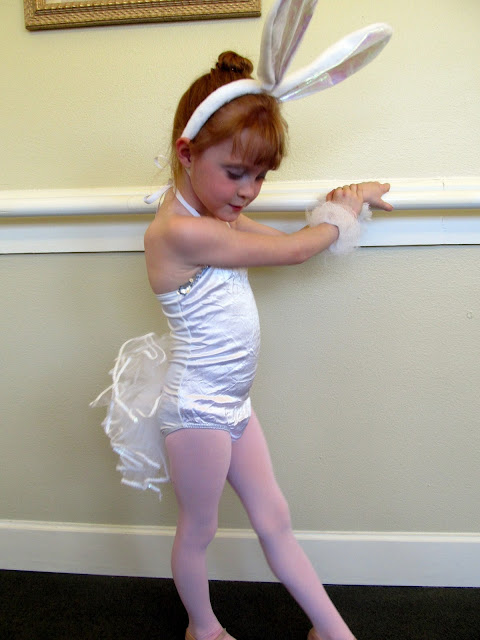 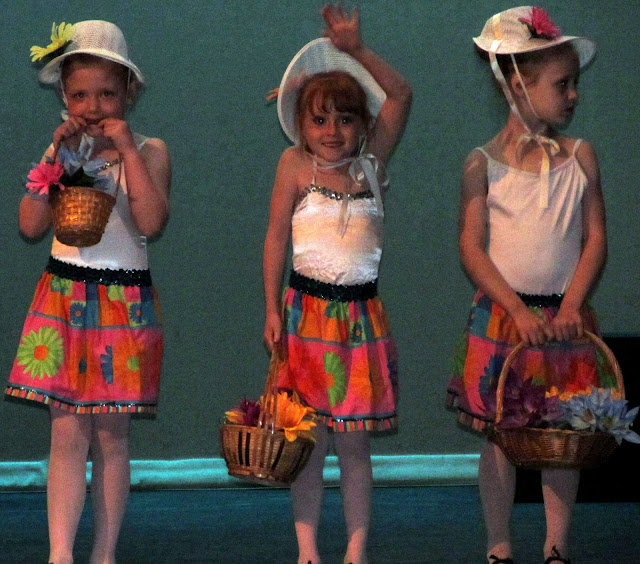 I took this pic at the recital, it isn't very good, but now you can see what I was talking about earlier. Hailey wouldn't rest until she spotted us in the audience, which meant she was putting her hands over eyes to block out the spotlights. Then she kept waving! She was quite the ham and had the entire audience laughing at the end of her first dance. They basically had to herd her off the stage when she wouldn't quit bowing to the audience. 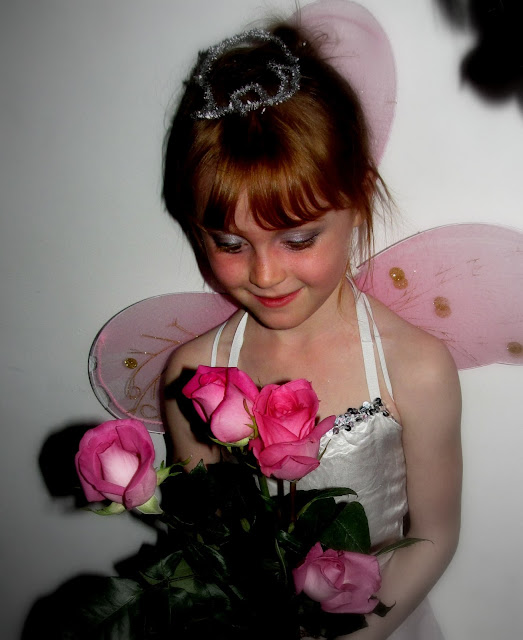 A sweet friend of mine saved me from being the bad mom. I had no idea you were supposed to get roses for your recital participant. Lishi was kind enough to give me some of hers. Hailey was thrilled! 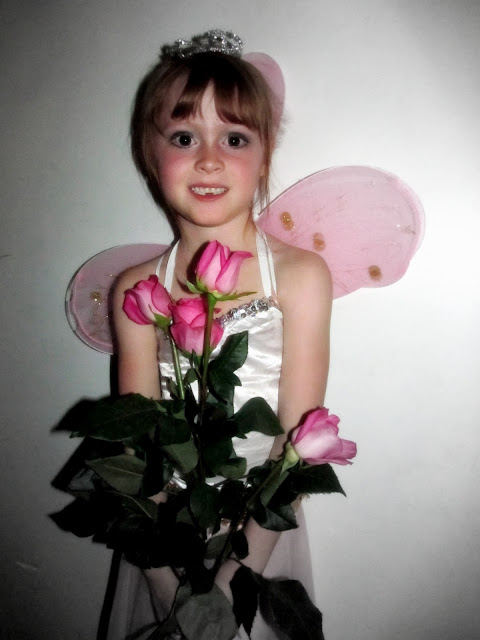 You can clearly see her first two missing bottom teeth. My baby is growing up. Can't believe she is almost six already. It sure goes fast!

A Time to Pray

As the blogging world goes one, I just have to stop and ask for prayer for a dear blogging sister, Camille, at "Flowers in His Garden" and her precious family. Many of you who follow my blog also follow Camille's. If not, I highly recommend that you do. THIS is a true woman of God. One whom has been selected to suffer mightily in this life, but whose testimony is being refined as pure as gold.

With tears I write this. Camille's 19-year-old son whom we've been praying for now for several years unexpectedly went to be with the Lord this past weekend. Austin died peacefully from heart complications. Please take a moment to read the amazing post that Camille wrote. The Lord is already working through this family in a mighty and powerful way. One thing is for sure - God is sovereign! We may not ever understand why this young man was taken so suddenly, but God was not surprised. Austin in now rejoicing in heaven, but I oh how he is missed by those left behind.

Please take a moment to read Camille's amazing words, written the day after her son was taken to be with Jesus. http://flowersinhisgarden.blogspot.com/2013/06/with-lord-final-update.html. Camille has been a role model to me as a homeschooling mom and godly wife. Even though I've never met her face to face, I have great respect and love for this woman and her family. I call on the Body of Christ to join me in prayer for this family. Thank you!

God Bless,
Jackie
Posted by Cheesemakin' Mamma at 10:15 AM 5 comments: