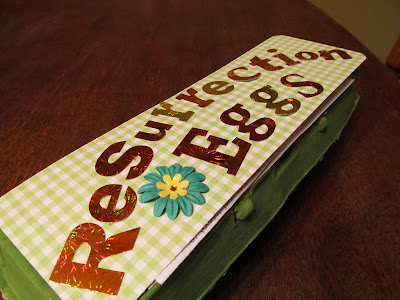 Repost:
As most of you know, I'm not much of a craft person, but our MOPS (Mother's of Preschoolers) creative activities coordinator, knocked it out of the park with this one. I have Sarah's permission to re-post it on my blog. Thanks to another friend of mine, Cora, she suggested we do this as an kind of advent working our way up to Easter. So we counted 12 days back from Easter and are reading the scripture and opening one egg a day that goes along with the scripture.

Resurrection Eggs Directions:
1. Paint the top of an egg carton, let dry
2. Measure and cut a piece of pretty paper the size of the top of the egg carton and write or use letter stickers that say "Resurrection Eggs". Add more embellishments if you wish.
3. Fold the printed page with the scriptures (see at end of this post) "accordion style". 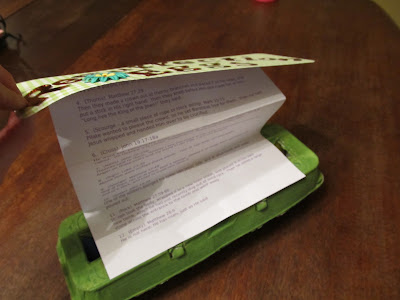 4. Hot glue the bottom of the page with the scriptures on it to the top of the egg carton. 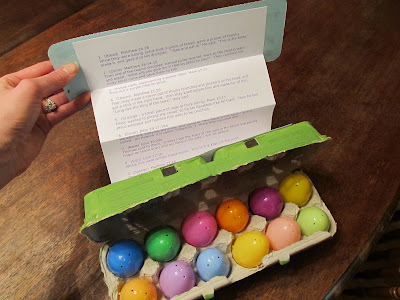 5. Using scrapbooking glue, attach the pretty "Resurrection Egg" title to the top of the scripture page.
6. Using twelve different colored eggs, number 1 through 12 with a black marker on the bottom and/or top of eggs.
7. Fill each egg with the correlating symbol according to the following pages with scriptures.

Resurrection Eggs
1. (Bread - can use a piece of cracker) Matthew 26:26
While they were eating, Jesus took a piece of bread, gave a prayer of thanks, broke it, and gave it to His disciples. "Take and eat it, " He said, "this is My body."

2. (Coins) Matthew 26:14-15
Then one of the twelve disciples, named Judas Iscariot, went to the chief priests and asked, "What will you give me if I betray Jesus to you?". They counted out thirty silver coins and gave them to him.

4. (Thorns) Matthew 27:29
Then they made a crown out of thorny branches and placed it on His head, and put a stick in His right hand; then they knelt before Him and made fun of Him. "Long live the King of the Jews!" they said.

5. (Scourge - a small piece of rope or thick string) Mark 15:15
Pilate wanted to please the crowd, so he set Barabbas free for them. Then he had Jesus whipped and handed Him over to be crucified.

7. (Nails) John 20:25b
Thomas said to them, "Unless I see the scars of the nails in His hands and put my finger on those scars and my hand in His side, I will not believe."

8. (Sign - make a tiny sign that says "King of the Jews")
Above Him were written these words: THIS IS THE KING OF THE JEWS.

10. (Spear - can use a toothpick)
One of the soldiers plunged his spear into Jesus' side, and at once blood and water poured out.

11. (Rock) Matthew 27:59-60
Joseph took the body, wrapped it in a new linen sheet, and placed it in his own new tomb, which he had just recently dug out of solid rock. Then he rolled a large stone across the entrance to the tomb and went away.

Email ThisBlogThis!Share to TwitterShare to FacebookShare to Pinterest
Labels: craft 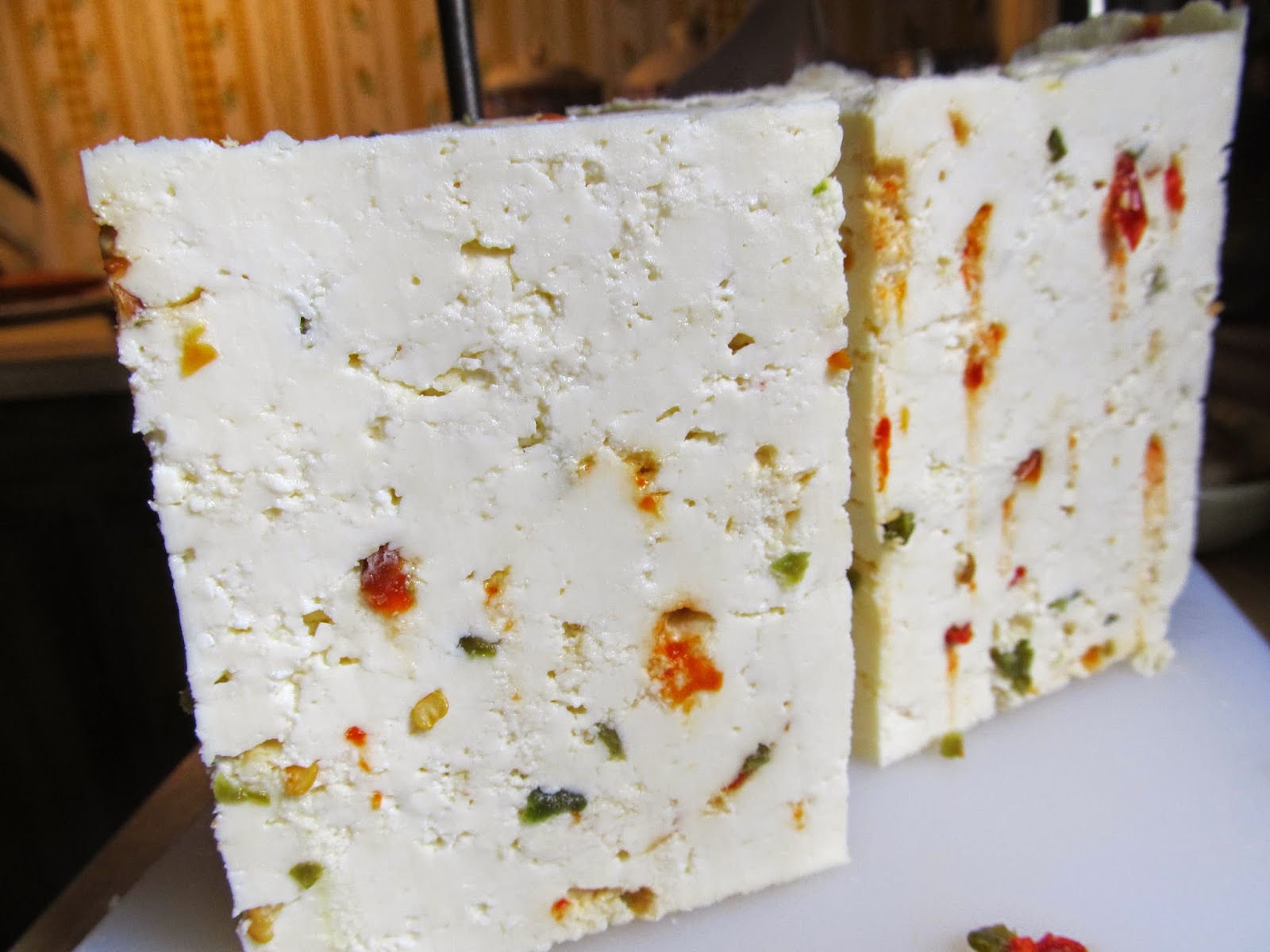 My husband and I love pepper jack, but we don't have the space to store waxed cheeses. So we stick with queso fresco mostly. We decided to try making our own pepper queso fresco and it turned out delicious. The great thing about queso fresco is that you can eat it immediately.  This cheese is especially awesome on tacos, quesdillas and sandwiches. It is also fun to serve with crackers because of it's eye-catching colors.

2. Then add ½ tsp liquid rennet or ½ rennet tablet diluted in ¼ cup water. Stir (from top to bottom) for one minute

3. Set for 30 minutes or until a clean break occurs.

5. Gradually heat curds to 95 degrees over 20 minutes, stirring gently every five minutes. Watch this step! Don’t overheat because your cheese will turn out like rubber (know this from personal experience).

8. Line mold or cheese press with cheese cloth and put broken up curds into it.

9. Press at 35 lbs of pressure for 6 hours. Remove cheese from mold.

Makes about 4 lbs of cheese.
Posted by Cheesemakin' Mamma at 6:00 AM 6 comments: