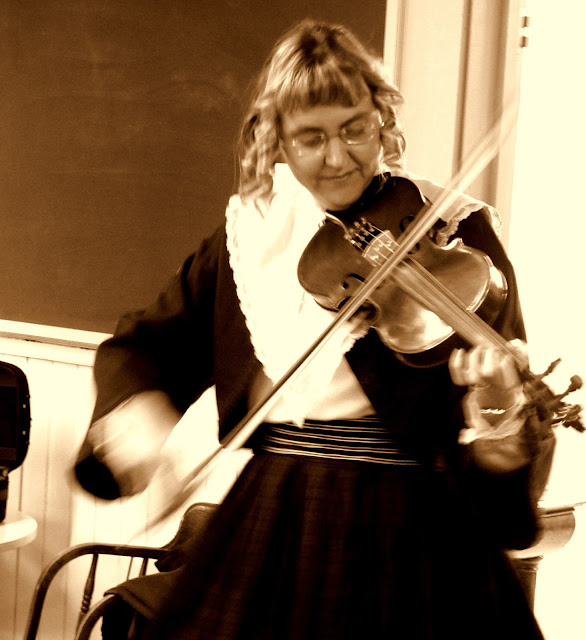 Normally, we do two co-op meetings each month, but we decided to do a School Exhibition and needed to give the kids plenty of time for memory work. We forewent a craft and instead concentrated on memorizing a longer bible passage (Romans 12:14-21), a pre-1880s poem or story, a Presidential historical review, and a long word list for an old-fashioned spelling bee. Of course we topped off our time together with a potluck based around the foods mentioned in Little Town on the Prairie. 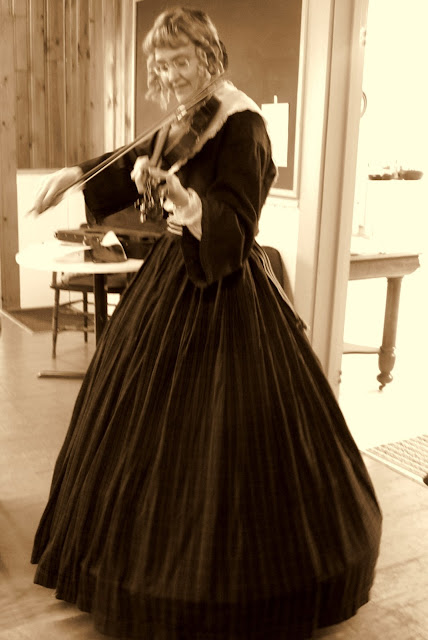 We started out with a prayer and then sang the song, "My Country Tis of Thee". I can play this song in my sleep perfectly, but as soon as I play in front of anyone other than my family, I get so nervous. I'm all over the place.  I just keep going even if I'm hitting the wrong notes. I get pretty frustrated with myself, but I also know it is good for the kids to see an adult who isn't perfect and is learning right along with them.

After the song, we did some Little Town on the Prairie trivia questions where horehound and lemon drop candy were given to those who could answer correctly.

Each child chose a Presidential historical review to recite. Hailey chose George Washington. Here is a short video of her recitation. 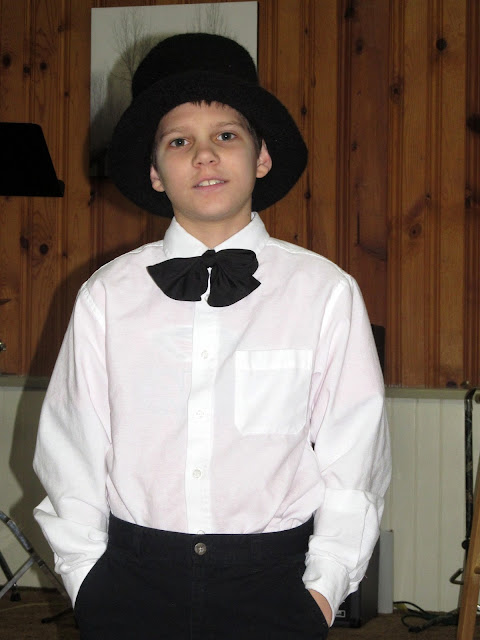 I love the felted wool hat my friend knitted for her son. I'm astounded at her talents! 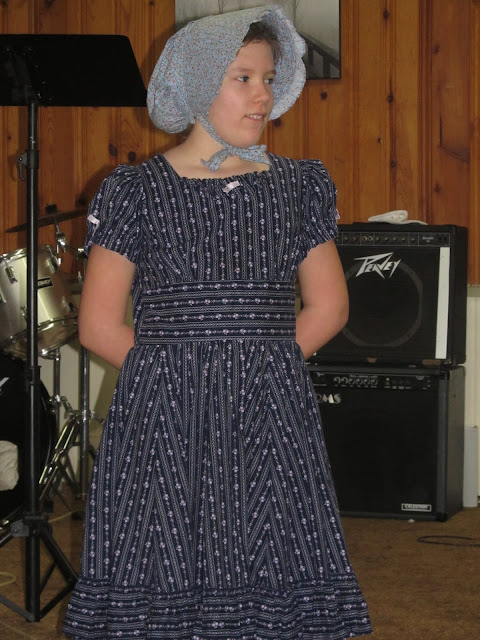 Next, we had the pre-1880s poem/story recitations. Hailey did very good job reciting "The Dog and The Shadow" by Aesop. The way she recited it was sooo cute and funny. I will always treasure this short video and the next of Josiah, too.

Josiah chose to recite the last part of "Address to the Haggis" by Robert Burns, Scotland's most famous poet. Of course he had to use some props. I love this kid's imagination. He insisted we bring a cooked haggis for everyone to try at the potluck. Here is my haggis recipe, which is Scottish cuisine based on a dare. Ma was Scottish, so we thought it would fit it in even though it is doubtful she carried on the haggis tradition as it is never mentioned in the books. 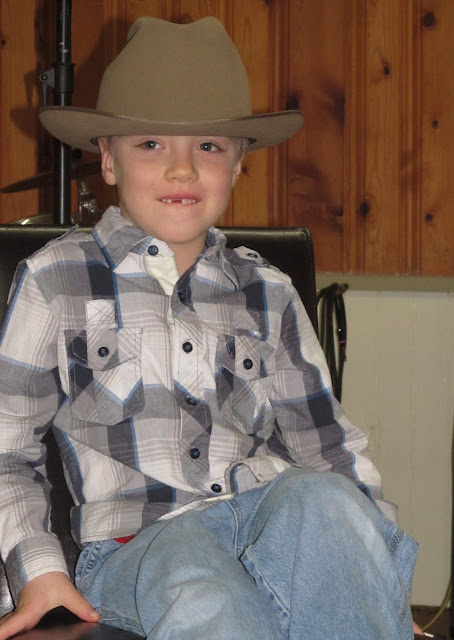 This little cowboy recited a poem. All the kids from pre-school and up recited something. They did such a great job. I was very impressed. I think we underestimate both ours and our children's ability to memorize things. 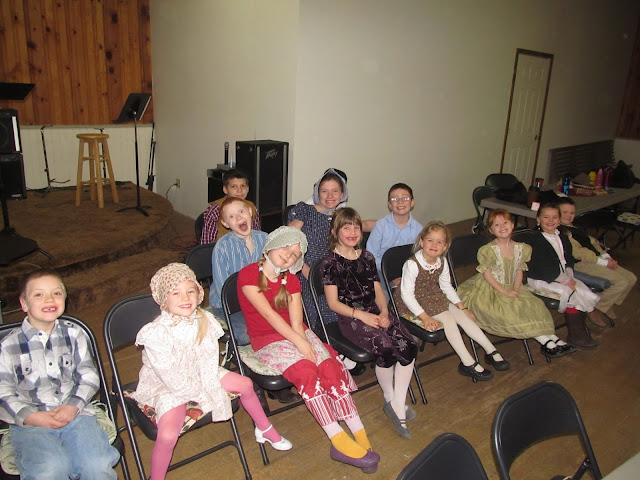 I think the spelling bee was everybody's favorite part of the School Exhibition.  We had it broken up by abilities. The front row is pre-school, kindergarten and 1st grade. Second row was 2nd, 3rd and 4th grades. Back row was 5th and 6th. Each row studied from the same word list and we just started at the beginning of the list and the kids took turns spelling words. 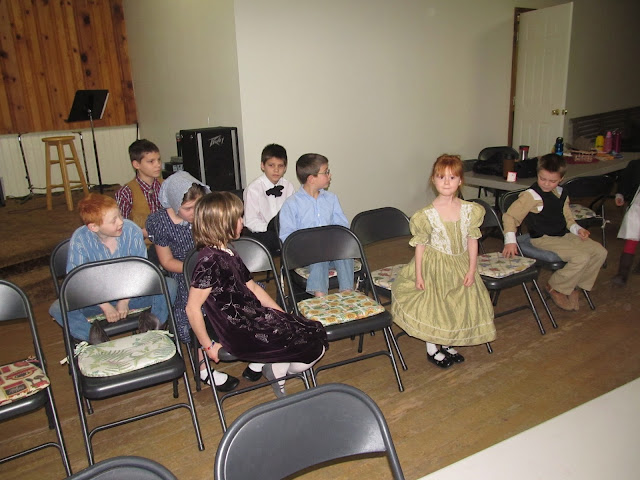 When they misspelled a word, they had to sit down. First place for each division got a trophy and prize (from the $ Store), and second place got a prize, as well. 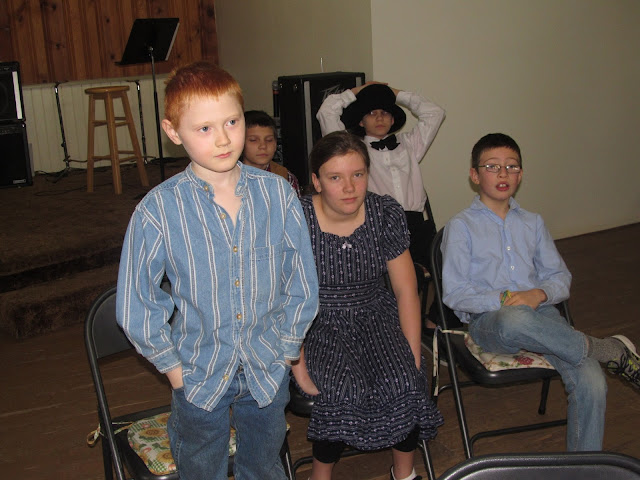 Spelling is NOT Josiah's favorite subject. We worked long and hard on his word lists but we only got through about half of what he was supposed to know. It isn't because he isn't capable, it is because he simply isn't interested. Nothing like a little competition to get him motivated though and he lasted a lot longer than I thought he would even though he was the first to have to sit down in his division. 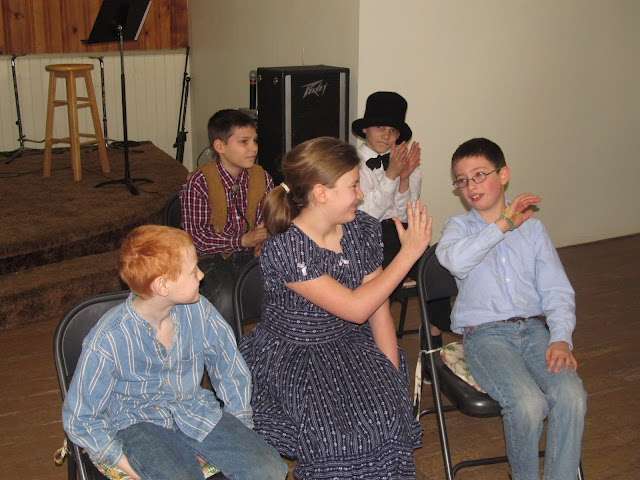 It was neat to see all the kids encouraging each other and clapping when they got a word right. I really want to do this again! 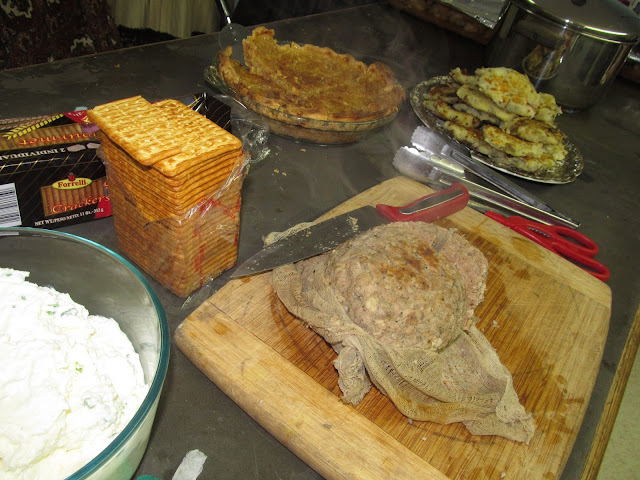 Potluck time! The mystery meat on the cutting board is the haggis. I had mercy on everyone and didn't cook it in a sheep's stomach, but instead I wrapped it in cheese cloth and steamed it in a Dutch oven. I also made soured cream cheese dip with green onions. Here is my recipe for that. I was supposed make cheese balls out of it, but I didn't get quite enough whey out so it ended up being a spread. It was still delicious. In the background, we have old fashioned vinegar pie, a staple at any 1800s potluck. It sounds disgusting, but it was actually very delicious and tasted like a lemon custard pie. What a treat. The fried mashed potatoes were good, too. 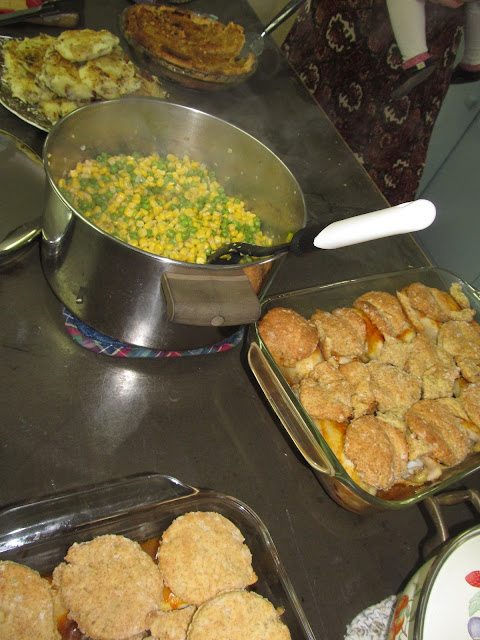 Oh my, I think this was the first time I've seen anything green at our potlucks! The corn and peas were a welcome change indeed. I'm sure the Ingalls felt the same way when they had anything green. We also had blackbird pie (substituted with chicken). All these recipes are out of the Little House Cookbook. 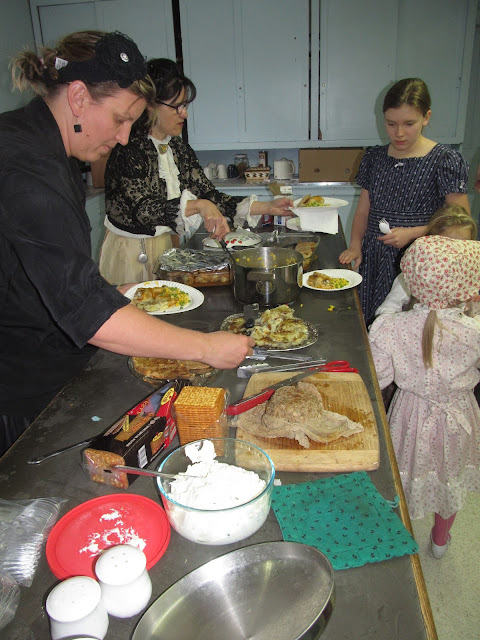 The moms serving up the dinner. 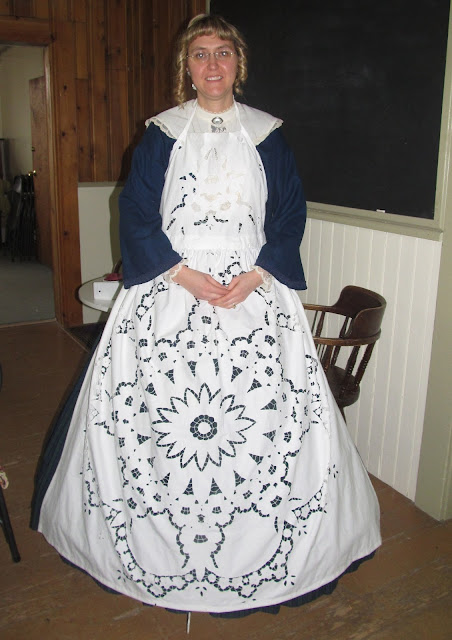 I was able to wear the apron my neighbor helped me make from a bedspread I found at a yard sale. It worked perfectly over my dress and hoop skirt. I went for the "Clara Barton" hairdo this time since we just read her very interesting biography. She was an amazing woman and founder of the American Red Cross. Such a hard worker! 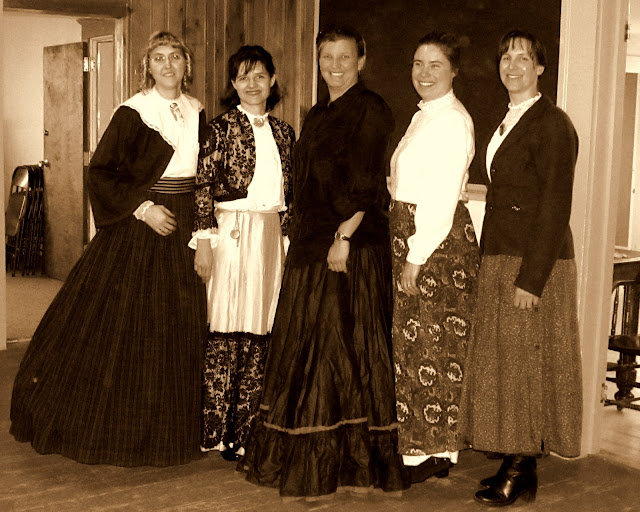 I insisted everyone dress up this time since it was the School Exhibition. I was thrilled to see each mom in all her pioneer glory! 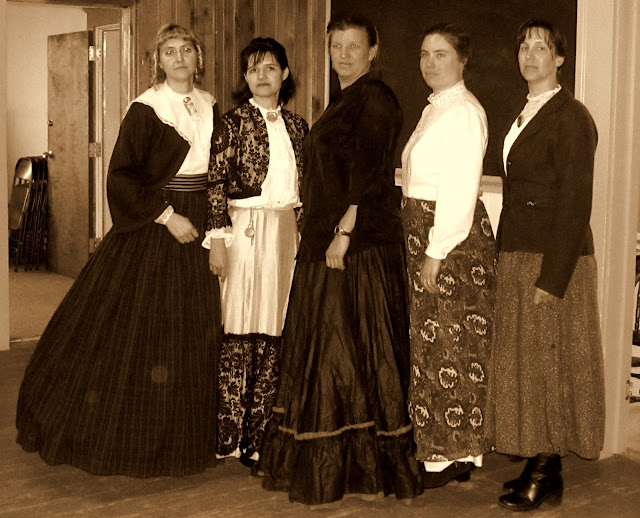 Prairie Primer homeschool marms. It is hard to do a stoic pose when you're having so much fun! My camera lens was dirty so there are some spots, but I guess it just makes the photo appear more rustic.

So now we are onto the wonderful courtship of Laura and Almanzo in my favorite book, These Happy Golden Years. I look forward to the next co-op meeting in April!

Jakie,
Your kids are growing up so fast and so adorable. The President speeches and poetry was done very well.

Much love and blessings to you and your beautiful family.

Love Josiah's face when he was trying to remember what year Lincoln was asassinated! That's classic!

And Haley reciting the fable, what a ham! Love it!

What a wonderful time you are all having this year Jackie! I'm sure it will be something your children will remember forever!! I know it's been a LOT of work, but, in the end, I am sure you will say it was worth it. :)

Wish we lived closer, I love how active your homeschool group is, such wonderful ideas and posts! How do you find time to juggle it all?
Have a lovely weekend.