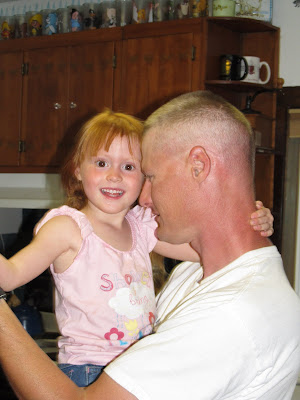 Thought I'd do a little catch up post. We've been so busy with the garden, yard saling, making soap, bible studies, bear hunting (Michael) and playing with the kids lately that I just haven't had time to post much and that is OK. I've learned that the world is going to be fine without a new post from Jackie's blog, LOL.
The first pic was one I snapped while Hailey and Michael were dancing to a Don Williams song. They are so cute together. They certainly have a special bond that is sweet to behold. 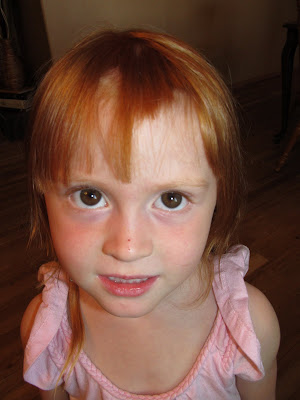 Hailey decided to cut her own bangs and this was the result. I'm was so thankful she didn't cut the back of her hair. I just kept telling myself it could have been so much worse, which was true. So we had to go to the " U-tician" (she can't say beautician yet) and have her wave her magic wand and try to do something with it. 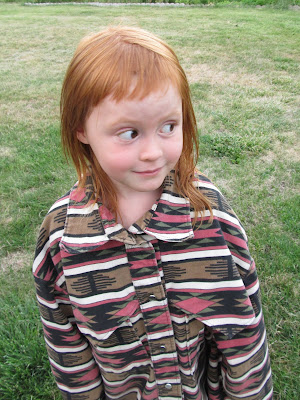 Here are the results. Hailey has very short bangs, but they are more blended in. They should grow back quickly. Little Stinker! 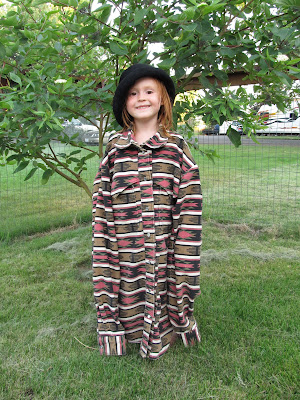 I was in the garden and Hailey came out in my shirt and hat. It just cracked me up! 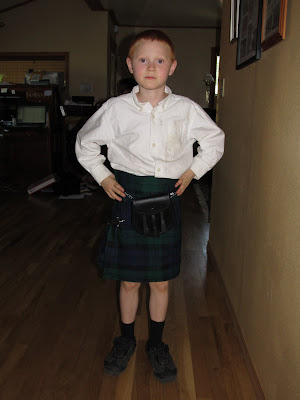 Josiah has saved for several months to purchase a "Black Watch" kilt in time for our community's first annual Celtic Festival. He also bought a sword kilt pin and we got him the sporran as an early birthday gift. He is so excited about this kilt, you wouldn't believe it! Kind of a funny thing for a 7 year old boy to want, but if you know Josiah at all, it totally makes sense. He's been wearing it everywhere I will let him. In fact, he decided he wants his upcoming birthday party to have a Scottish Highland theme. We are going to do kid-friendly Highland games. I've got the decorations all figured out and I'm asking all party attendees to wear plaid. Josiah is soooo excited! 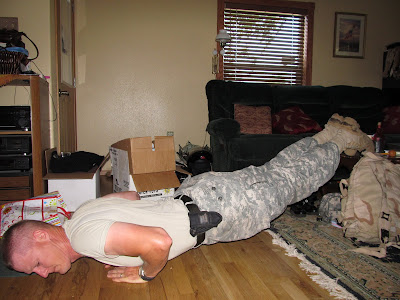 I've been switching up my exercise routine this summer. Not only am I biking to Curves twice a week, I'm also jogging 2 to 3 times a week (up to 2 miles) and doing sit ups, push ups and leg lifts. I'm down to my goal weight and I'm getting more toned up. Didn't realize how tight my pants were getting until they fit again, LOL. I was doing push ups one day and Michael decided to show off what he can do. No, he isn't touching the ground with his chest. His legs are up on the coffee table and he's formed a diamond with his hands. I tried it, what a joke. I made him let me take a picture of him for posterity's sake, LOL.
We had some really good news. Michael came back from drill this last weekend and told me his unit's mission to Afghanistan was canceled! Yee Haa!!! He was bummed, but the kids and I and all the family are thrilled. He's a typical guy, wants to go away for adventure, but soon after he's gone, he is ready to come home. It's that wild, adventure-loving heart of his. I'm ecstatic to not be gearing up for another deployment any time soon. Woohoo!!! Thank you, Jesus!
As for the garden, I'm still waiting for things to ripen up. Soon, I hope, we'll be canning pickles.
I've decided not to start homeschooling until October since Josiah is ahead. September is so busy with processing produce from the garden, the Pendleton Round-up, MOPS starting up again, and Josiah's birthday party. We're even going to squeeze in a Civil War reenactment (spectators, not participants) with my sis and her older kids. I'm also working on getting a once a month Creation Science class going for our homeschool group. I'm very excited about that!
I'll be posting on a cool homeschool field trip we took to Camp Carson Mine next... Hope you are all having a great August!
God Bless,
Jackie
Posted by Cheesemakin' Mamma at 5:18 PM

Her hair looks so cute! LOL Push ups have never been my strong point! :-) Glad things are going well and he doesn't have to go to Afghanistan! Enjoy the rest of these summer days!

Thankfully I haven't one of those oops moments with my kids. Oh wait, just a few months ago at age seven, Bethany cut her bangs too. But it's discreet and I didn't catch her for a few days.

Love all the pictures of Hailey, silly kid!

Rejoicing with you over the cancellation of Michael's deployment. My heart hurt for you every time I thought about it.

Her hair looks better now that it is blended.

Thanks for the updates!

Josiah looks great in his kilt. He is going to have so much fun at the Highland games!

Tell Michael he is doing good with his PT.

Congrats on reaching your goal weight Jackie! That's fabulous! And I am so happy for you to not have a deployment in the near future...that's wonderful. And...that little girl of yours is too cute for words...I'm glad the hairdresser was able to do something with her bangs...LOL! Congrats to your Josiah on the purchase of his very own kilt...he must be so proud. And...I think it's great that you are planning to take September *off* from the books...but, it will certainly not be *off* for learning...sounds like LOTS will be going on around there. :)

Many blessings to you!
Camille

Loved getting all caught up with your and yours, Jackie. I'm glad you are giving yourself the grace to begin school in October; there is wisdom at work in that!

PRAISE THE LORD your hubby is not redeploying! WOO HOO! My son-in-law just came back from his second tour in Iraq.

Hailey's hair looks so cute! And that pic of her standing there in your shirt and hat....PRICELESS! It made me smile!

Your garden looks great. How wonderful that you are blessed with an abundant harvest!

I pray you all enjoy the rest of your summer!