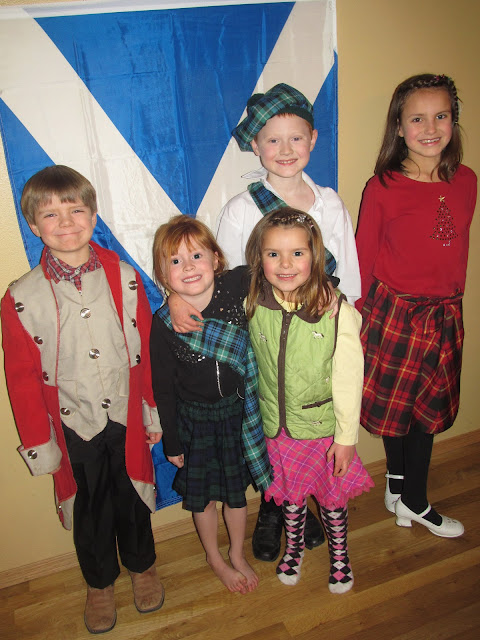 When reading the "Little House" books, going all the way back to Laura Ingalls Wilder's great grandmother, Martha Morse, who was the daughter of a laird in Scotland in the late 18th century, we discovered Scotland's biggest holiday called "Hogmanay". As you may have guessed, our family is very interested in all things Scottish and we have enjoyed exploring some of our ancestral roots. Some of the traditions described in "Little House in the Highlands" sounded like a lot of fun and so I determined that we would have our own family-friendly Hogmanay celebration come New Year's Eve.

We invited some homeschooling friends who happen to be just as crazy as us, whose descendants are from Clan MacGregor. They are always up for learning new things and trying new foods. Like...Haggis! 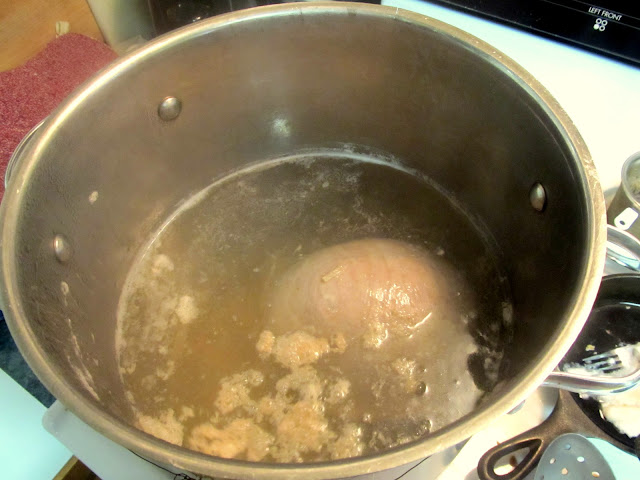 If you've never heard of haggis it is traditional Scottish cuisine based on a dare. Basically it is the organs of a sheep, ground up and mixed with oatmeal and spices and then stuffed in a sheep's stomach and boiled. I was super excited to try making our own haggis as I bought some once and didn't care for it at all. What I made was much better, but there is a lot I would improve upon the next time. I'm going to post my revised recipe soon as well as instructions. 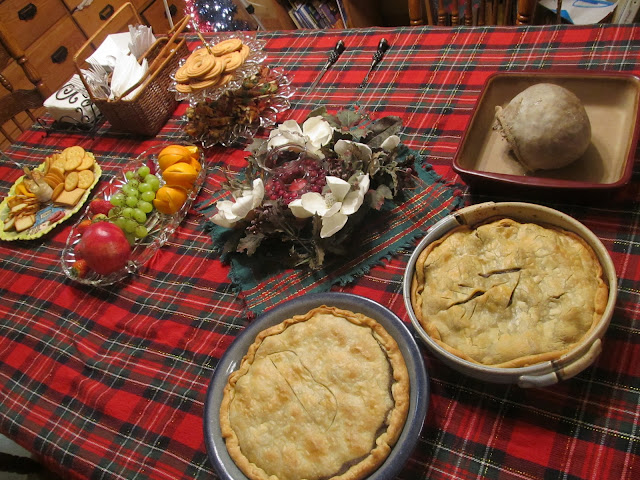 Haggis and steak pie, short bread and fruitcake - all Hogmanay traditional cuisine. My friend, Cora, made these delicious steak pies out of elk meat.  I loved the bow and arrow she carved into the crust. A nod to the movie, "Brave". 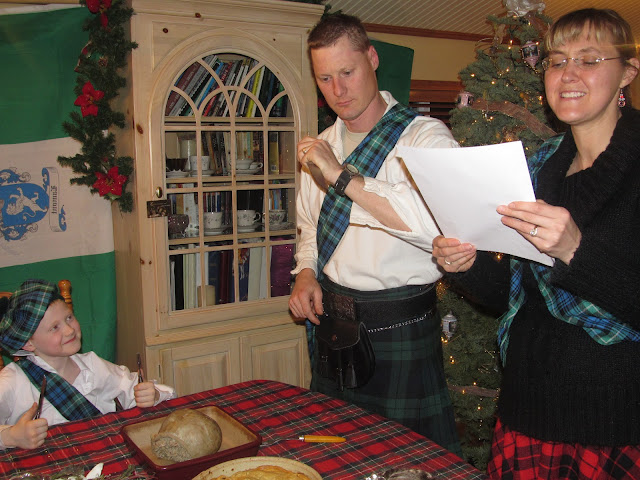 I read the Robert Burns poem, "Address to the Haggis" with great passion. The kids got a kick out of that.

Address to a Haggis Translation

Fair and full is your honest, jolly face,
Great chieftain of the sausage race!
Above them all you take your place,
Stomach, tripe, or intestines:
Well are you worthy of a grace
As long as my arm.
The groaning trencher there you fill,
Your buttocks like a distant hill,
Your pin would help to mend a mill
In time of need,
While through your pores the dews distill
Like amber bead.
His knife see rustic Labour wipe,
And cut you up with ready slight,
Trenching your gushing entrails bright,
Like any ditch;
And then, O what a glorious sight,
Warm steaming, rich!
Then spoon for spoon, the stretch and strive:
Devil take the hindmost, on they drive,
Till all their well swollen bellies by-and-by
Are bent like drums;
Then old head of the table, most like to burst,
'The grace!' hums.
Is there that over his French ragout,
Or olio that would sicken a sow,
Or fricassee would make her vomit
With perfect disgust,
Looks down with sneering, scornful view
On such a dinner?
Poor devil! see him over his trash,
As feeble as a withered rush,
His thin legs a good whip-lash,
His fist a nut;
Through bloody flood or field to dash,
O how unfit.
But mark the Rustic, haggis-fed,
The trembling earth resounds his tread,
Clap in his ample fist a blade,
He'll make it whistle;
And legs, and arms, and heads will cut off
Like the heads of thistles.
You powers, who make mankind your care,
And dish them out their bill of fare,
Old Scotland wants no watery stuff,
That splashes in small wooden dishes;
But if you wish her grateful prayer,
Give her [Scotland] a Haggis! 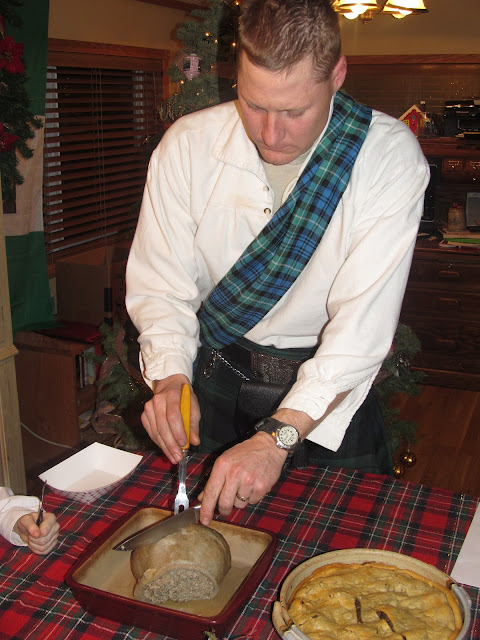 Michael had the honor of cutting into the haggis as the man of the house. 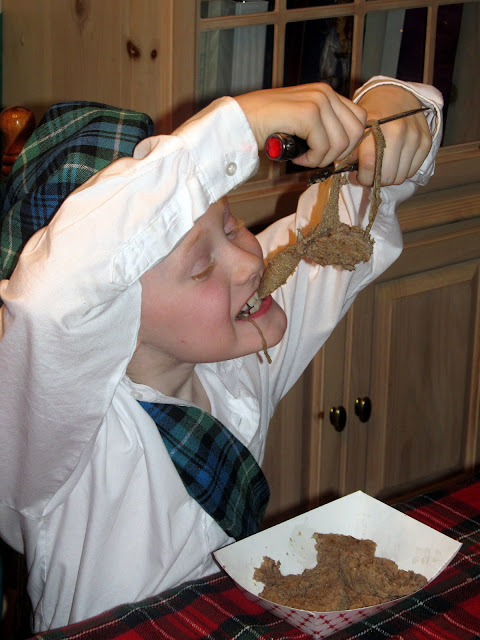 I couldn't believe it but Josiah and his friend, Riley, actually liked it! Still a bit to much liver flavor for me, so will cut back on that next time. Josiah even tried the stomach, but he didn't care for that, so he just stuck with the filling made of minced liver, kidneys, testicles, hearts and tongue. The smaller kids weren't fans, but I was proud of them for trying it. Hailey ate some leftover haggis the next day with ketchup and was fine with it. 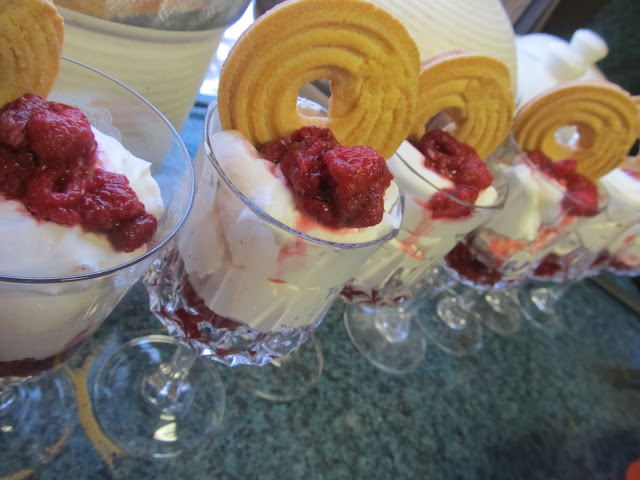 The Cranachan was delicious! Who wouldn't like raspberries, whipped cream with a little oatmeal and shortbread? We made an family-friendly whiskey-free version. It was the easiest dessert I've ever made and the prettiest to boot. I will be posting that recipe soon, too.

I found a really great story about Highland hospitality in book called, "The Well of the Heads". The story happened to centered around Clan Lamont (our clan) and Clan MacGregor (our friends' clan). Our clans shared neighboring ancestral lands in the Highlands and were on again off again in their relationship. It was a wonderful story of how forgiveness blesses you in the end. 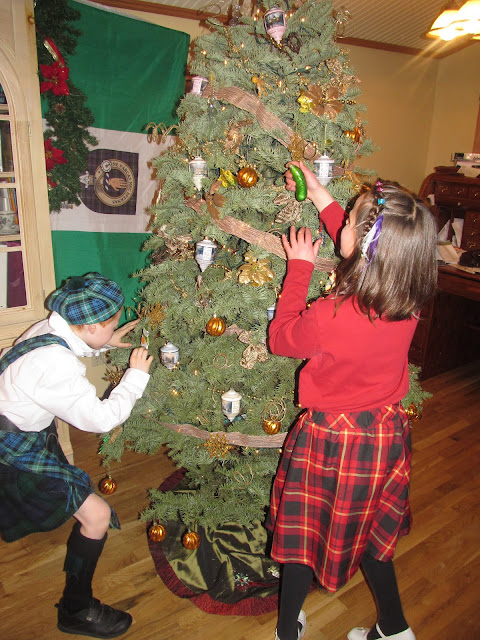 Our friends are also of German descent (on their father's side), so we did a decidedly German tradition and hid the pickle ornament in the tree. The kids had a blast finding it. 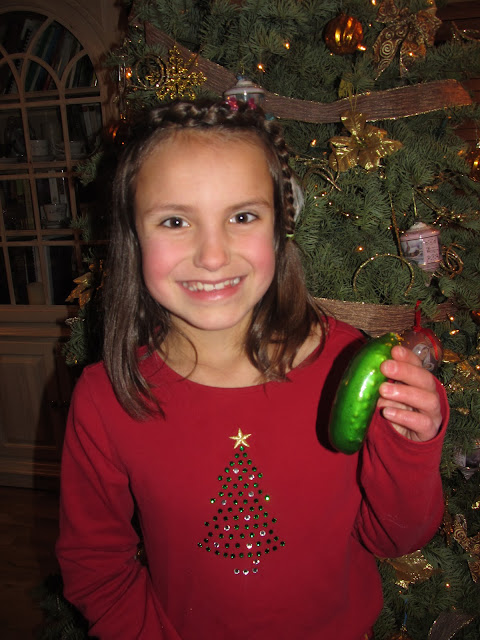 Riley found it and we gave her a little prize. Ha, another way for me to get all this sugar out of the house! 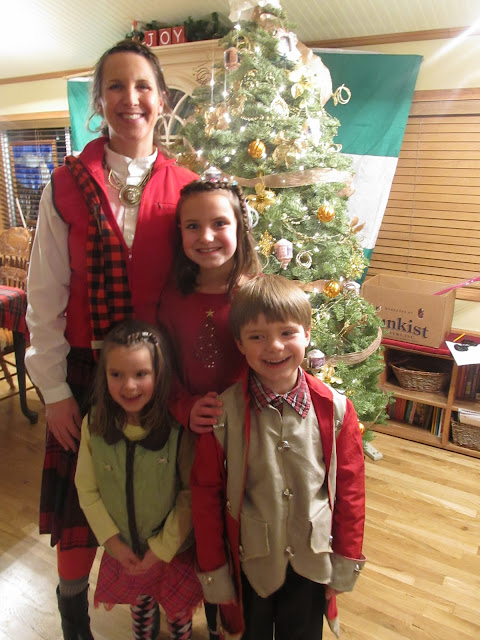 Clan MacGregor. Unfortunately their father was sick at home that night. We missed you, Tony! 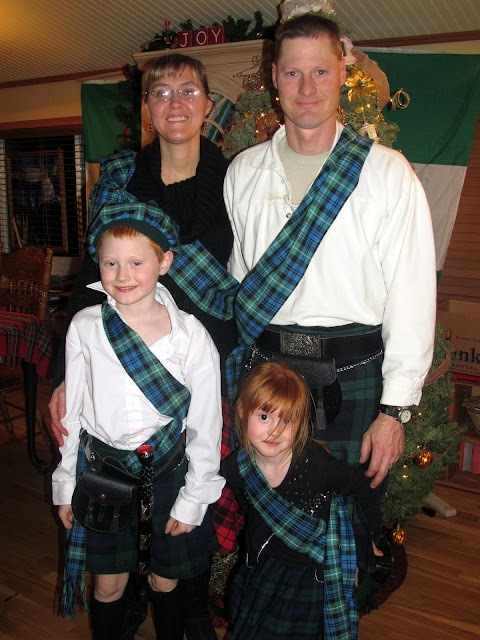 Clan Lamont
t midnight we turned on You Tube and sang  "Auld Lang Syne" (with subtitles). Loved this version: 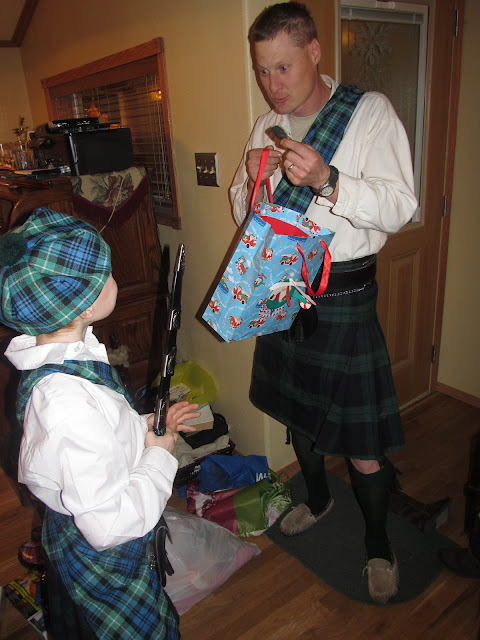 Towards the end of the song, Michael snuck outside to knock on the front door for "The First Footing". This is a fun Hogmanay tradition. No, we don't believe in luck, but this was still fun. In Scotland, it is considered good luck for a tall, dark man to be the first to knock on your door after midnight. A fair-haired man or even worse, a redhead (yikes!) was considered the worst of luck to be the first to knock on your door because it is reminder of the Viking invasion of Scotland long ago. We chose to use my husband because his once extremely blonde hair has darkened up quite a bit as he's gotten older. The man/lad is to come bearing gifts for the household that represent blessings for the new year. The first gift was a chunk of coal to which Michael said, "Long may your chimney smoke!". 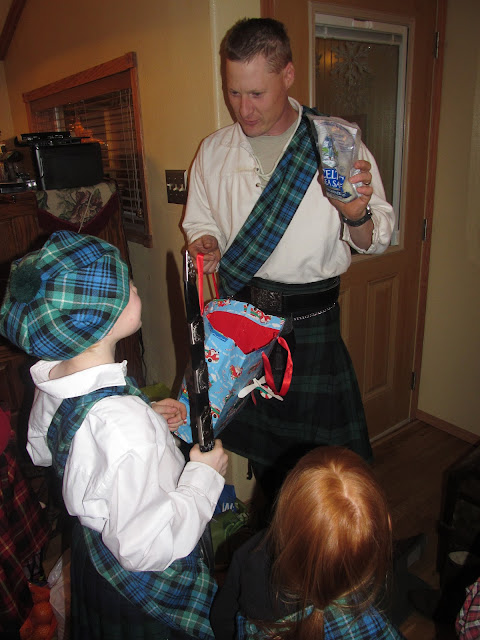 The second gift is salt. I never did figure out the significance of this except I know salt was highly valued in the old days for its preserving qualities. Some times salt was used as currency. Yep, we used Celtic Sea Salt! 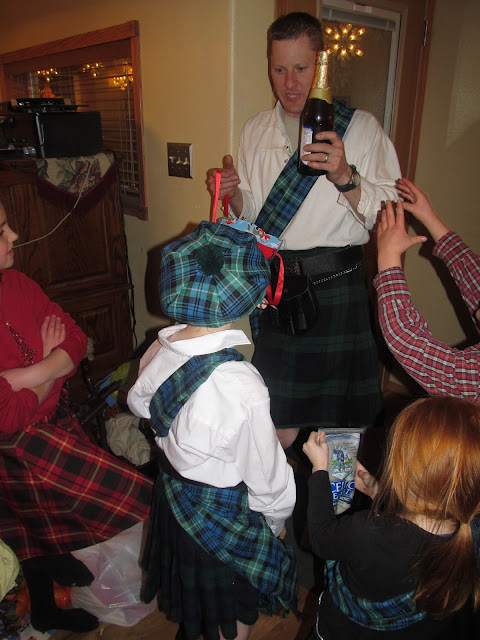 Tradionally, you're supposed to bring a bottle of your best whiskey, but we chose sparkling apple cider. 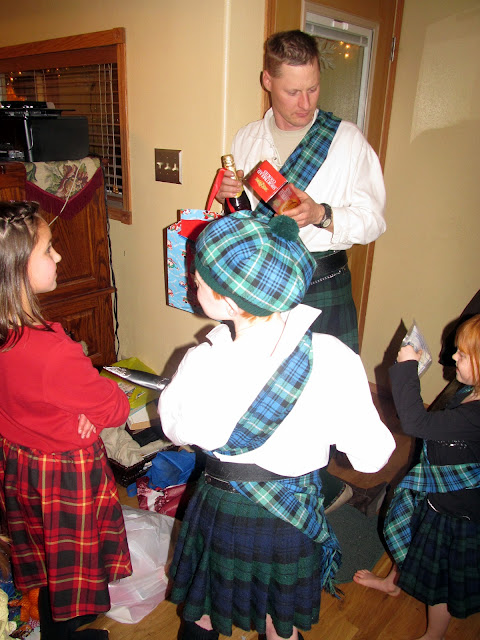 He also brought us shortbread, another traditional Hogmanay gift. 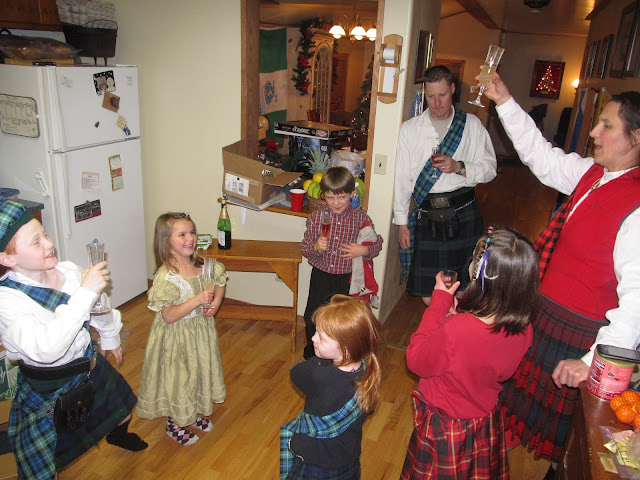 After the Hogmanay gifts were given to the household, Michael prayed and asked God's blessing on each of our clans for the coming New Year. Then we did several rounds of toasts with our apple cider. 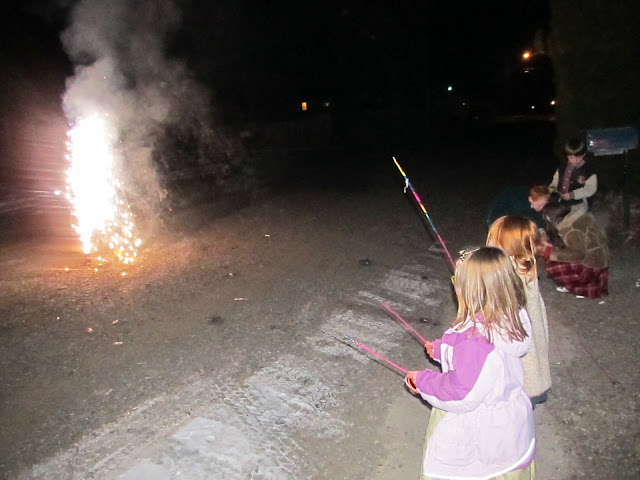 We finished up with fireworks, another Hogmanay tradition. Actually, they do fire ball swinging that looks really cool at night. We just stuck with fireworks and gigantic sparklers that my mom was kind enough to buy for us. I'm sure the neighbor's were thrilled, LOL.

This was by far the most meaningful New Years Eve I've ever been a part of. We all enjoyed ourselves and hope to do it again next year. It was fun trying different traditional Scottish recipes, too. A big thank you to my friends for joining us and contributing to a uniquely special evening.

What a fun night! You are all very brave for cooking and eating the Haggis. Not sure I could do that! :)

That looks like a lot of fun, although I think I'd probably pass on the Haggis! Sorry, I'm just not quite that adventurous.

I love seeing all you traditions Jackie. Your kids are going to have some very fond memories.

Wow, Wow, Wow!!! I'm impressed at your research on the subject, Jack. what fun!